Worms (reddish, pink) in the worm bin tray. You can also see some squash rind and some shredded paper in this picture. 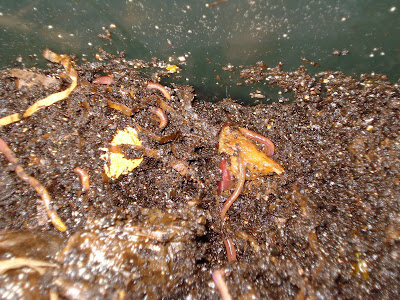 This is a worm in the lid. 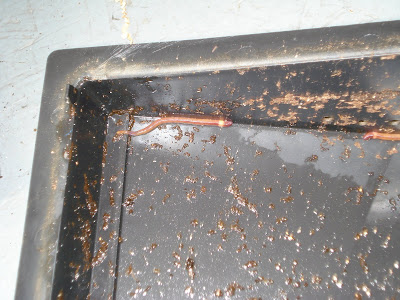 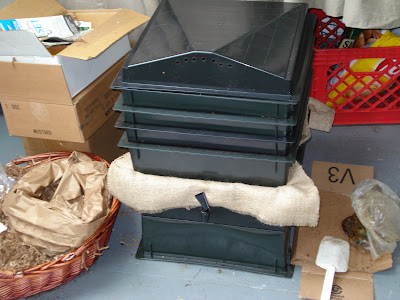 This is the tray. I'm able to get worm tea from the tapper.
I love this worm set-up. Its got different layers of trays so I can feed my worms on several layers at a time. I've been really careful about not feeding them too much - which I hear is the most common mistake in new bins. For the first two months, I have only fed once a week (although probably 2+ lbs of scraps, which is a lot) and then didn't open the bin until the following week. It seems to have worked well as they seem to be multiplying.
We started this in Dec 08. We've always been composters, but composting in the city is difficult (mostly b/c of rodents). Plus, in the winter you are essentially just tossing your scraps into the pile and they freeze. I don't have a manure or straw component to my outdoor bin so its doesn't run hot like a lot of outdoor compost piles. My indoor worm bin allows us to compost year round and I'm able to use the castings as seed starter. I'm experimenting with different "recipes" for seed starting (i.e. more or less castings, etc.).
Plus - I think they are neat.
One thing that I don't like: its plastic.

Super! I love the worm bin, but really I love the residents the most. I am always rescuing worms in spring when they go under the garage door strip thingy, and I would otherwise run over them when I back out of the garage. I keep a brush and dustpan handy and brush them all in and pop them into the garden before I go. No point in wasting a good worm!

Congrats on your growing family!