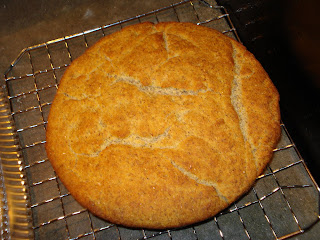 I made up this recipe. Well, not really, but I experimented.
Don't buy that Jiffy blue box cornbread. ick, ick, ick.
I made this cornbread with a combination of buckwheat flour, ww pastry flour and some white flour. If you have fresh baking powder to give cornbread its rise, you can mix any kind of flours, an egg, some oil and some buttermilk.
Also, be sure to heat up your cast iron pan (yes, must have cast iron!!) before adding the mixture. Cornbread doesn't have to be with corn. So, I guess this is Buckwheat bread instead.
Posted by angie at 7:45 PM