Whew, it was a whirlwind weekend!
Here is the recap of Thursday.
We met with the NRCS conservation agent first thing on Thursday morning. Bill had the idea and forethought that we send him the sketch we did several weeks ago outlining our plans for the 20 acres.
On the drawing (on a large survey that Bill has recreated from the survey in CAD), it shows:

The first thing he said to us - well, you have a lot of plans. I think he truly thought we were crazy.

He didn't know much about permaculture or organic growing. He did give us some good ideas on erosion and our invasives problems. Overall, though - I think Bill and I probably knew about as much as he did. It was nice to walk the ground with him and have someone to bounce our ideas off of. I did also ask him how many people in Grant County applied for the hoophouse program through NRCS - he said 6. I asked how many were funded and he said zero. Disappointing.

We spent the rest of Thursday getting the tractor running - Bill changed the oil, did some priming on some rust spots and generally greased and oiled it up. I finished cleaning out the garbage and the recyclable metal from the bottom of the barn (yes, that is still going on!).

You can see in this photo that all of the floors are swept free of debris. The area is now ready for construction. 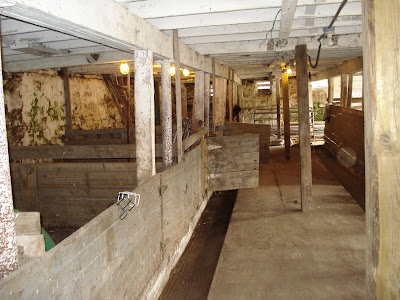 Each stall has a trough in the floor that was filled with manure, soil and sometimes garbage. I shoveled out each one and dumped the non-garbage material in the feedlot. Garbage went into the garbage pile. The trough will give Bill a surface to build buttresses against. 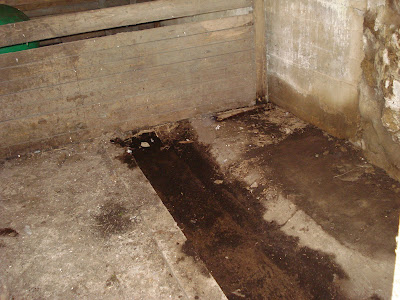 Bill started the framing for the re-pouring of concrete buttresses where the stone foundation is failing. We must do this to ensure proper footing for the barn before we jack up the barn and rebuild/reinforce the beams in the upper barn that are rotting and/or broken. The photo below shows the initial beam. 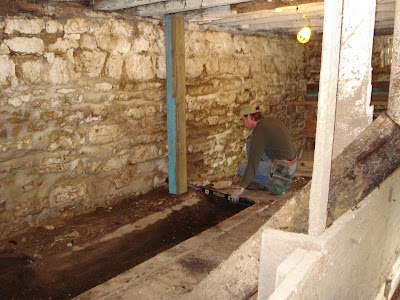 This photo shows the beam and the buttress that is using the concrete trough for added strength. These will hold the wall in from further pushing out, give stability to allow us to chip out the limestone foundation that is failing so that we can eventually pour some concrete buttresses to reinforce the wall. 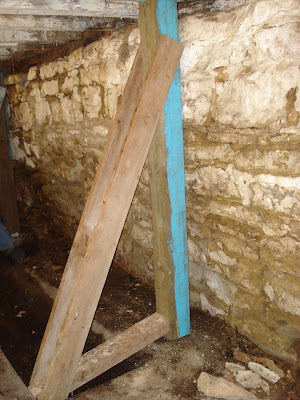 And for supper? Nettle pesto. Nettles harvested straight off of our farm and eaten that night. It was our first time eating nettles and it was delicious! 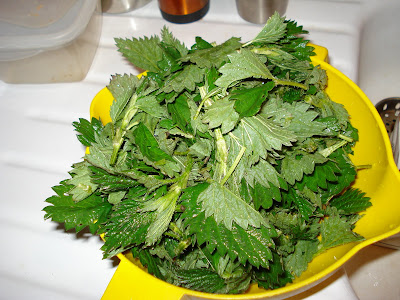 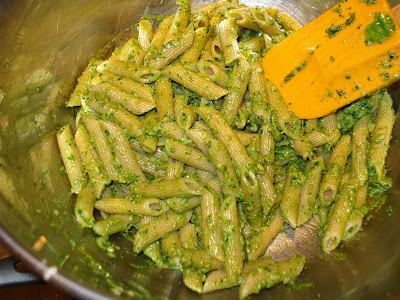 I hope you aren't too disappointed that the agent wasn't more help. We've had some experiences like that too and it's a letdown. Just look at it like you're the best person for the job then.
I wasn't aware of a hoophouse program, is that specific to your area?

The hoophouse program is through the USDA and the NRCS. Check out your local NRCS office.
http://www.growingformarket.com/articles/20091210

I've called our county extension agent a few times and been equally disappointed. I asked where I could get my soil tested, and he said that the fertilizer companies do it for free. Later I called to ask where I could get my hay tested, and he said I didn't need to -- I could just use book values. Argh!!! He never even admitted that he didn't know.

Thanks for stopping by. I love your blog.

"The fertilizer companies do it for free.." oh my... that is a whopper of a comment.

We were in your area (I think) on Monday. We participated in a hoophouse workday at Peasant's Plot. Do you know them?

Peasant Plot sounds familiar, but I don't know them personally. I want a hoop house so badly! I want fresh salads and spinach all winter!