Disc'ing and celebrating the 4th

Our disc finally arrived - it was about 3 weeks later than it should have been. Bill was in Wisc and got the call that it had arrived on Fri, 6/24 in the morning. He was supposed to come home that day but opted to stay all day and disc our fields that badly needed it.

With the wise advice of our farm mentor, the plan is now to rake (i.e. with our cultivator) several times to pull the quack grass out. So we did that yesterday. 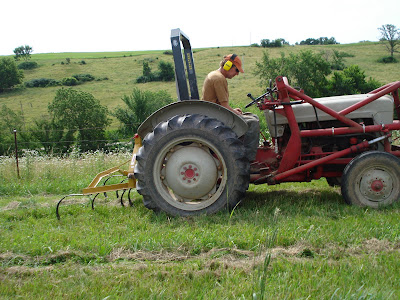 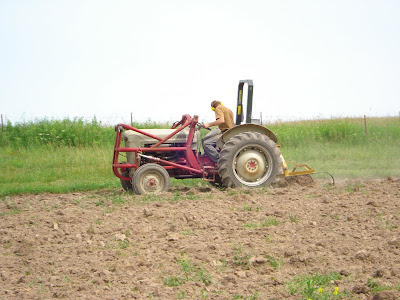 Bill did one pass and as I was standing at the field edge admiring the soil, I noticed it moving. Like something was burrowing underneath. Groundhogs. If I had a shovel with me, I could have done away with it.

We are having a real infestation of groundhogs at our farm and it is becoming quite a problem. The burrows are everywhere and we often even see them poking their heads out of the burrows. Preferring to not use poison/bait, we've opted for the old-fashioned route. Bill dug out his rifle from his childhood, dusted it off and has been target practicing. 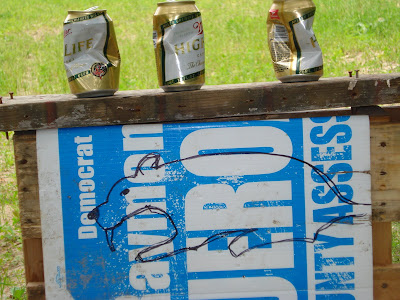 (Yes, our High Life cans from the day before. Our 'end-of-day-good-day-of-work' celebratory beer We typically like microbrews, but on a hot summer day, there is nothing like plunging your hand in an icy cooler and coming up with a can of beer.)

As he was sighting the scope, Bill urged me to give it a try. (It just seems like the 4th of July is the appropriate time to shot a gun, right?) I've never shot a gun before and I was scared. This is an easy to handle rifle and after Bill's gun safety course (he made me repeat outloud the rules, work the safety, load it, unload it, and put it on single shot, etc.) I did it! I didn't hit the target but it wasn't as bad as I thought it would be. I don't think I'll be target practicing on a regular basis, (I'd rather weed the garden). But it was good to try and I might do it again (especially if my friend Mimi comes up to do some target shooting too! :) ) 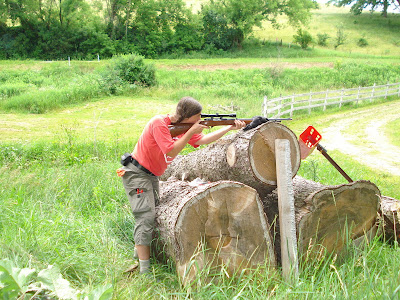 This picture is for my sister-in-law. Pickles enjoying the double full screendoors at our church-house. 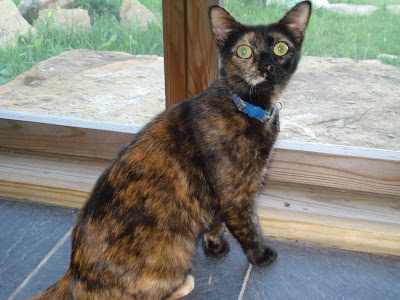 My, what big logs you have! LOL! You look pretty good holding that rifle!

I harvested my garlic a few weeks ago... I think more fertilizer and water would have been great. I used liquid fish emulsion and the rain was weeks and weeks apart, so I had to suppliment a good deal. I just don't think I gave it enough. *sigh* I was worried about watering it too long and rotting the bulbs. I did get a decent harvest, though! I'll try to get a pic loaded so you can see. I'll definitely try again.

An actual Farmer's Market (as in, not the one's owned by a single farmer like we've always had here) is finally getting off the ground and I had the opportunity to talk with a local grower from Adel, Ga. He's growing garlic, too, and had some beautiful bulbs with him. It CAN be grown in the South!

You are a natural! Can't wait to do some shootin! - Mimi

Yes, they are big logs, aren't they? They are future farmhouse stairtreads and cabinets! I'll pop over to your blog and look for your pictures soon. Great news about the market!