While doing some clean up last weekend at the farm, we happened upon a snake sunning itself in the driveway. 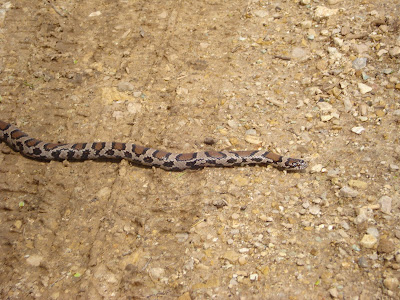 It was about 3 feet long, no rattler on the tail 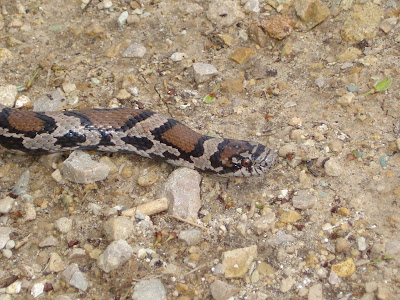 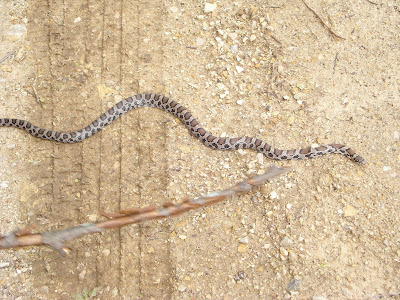 Didn't strike at the stick 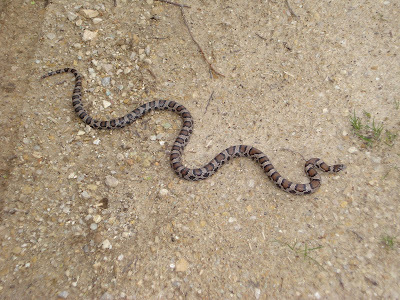 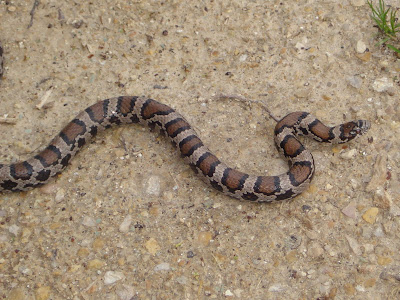 After some internet research, we've decided that it is a Milk Snake. Milk Snakes are often mistaken for a Bull Snake (which is an endangered snake) as they have somewhat similar markings. Milk Snakes' markings are very saddle shaped with a dark outline. They have round eyes - I learned that round eyed snakes are not poisonous. They don't have a rattler, but they often shake their tail when disturbed and it can sound like a rattle if there is leaf litter nearby. Preferred living conditions are valleys and farmsteads where there is water (our farms perfect!). They eat mice, voles and insects and kill their prey via squeezing it until it can no longer breathe a/k/a constricting. Once their prey is dead they swallow it whole. They lay cluches of eggs numbering from 6 to 20.

Farmers gave these snakes their name as they believed that the snakes snuck into barns at night to steal milk; when actually the snake was more likely to be after the rodents associated with milking barns. Unfortunately this belief resulted in many of these snakes being killed.

Milk Snakes are also very popular with the snake-as-pet population. We were happy to see it - especially once we discovered it ate rodents! - but we certainly won't be inviting in the house.

It spent about 10 mins sunning itself on the driveway and then slithered off.
Posted by angie at 2:22 PM

Hi Angie: We often encounter snakes at our WI place in the spring, and I'd always assumed they were bull snakes--I had no idea those were endangered. I'll be more careful with my ID in future. Cool shots and great info!