Bill and I, along with our friend Julie (deLeon Design), won 3rd place in a City of Chicago sponsored design/build bird house competition. There were eight categories of bird houses to choose from - we built two: a American Kestrel house and a Purple Martin house. The idea was to get people thinking about Chicago as a birding locale since it is located on several migratory paths and the location of the lakefront makes it very bird friendly.


Our American Kestrel house was an homage to Chicago's new sustainable architectural revolution and it's visionary. We constructed the American Kestrel house, named Aqua Prairie, from local (western IL) black locust - sustainably timbered and treated with soy based finishes. The banding around the house is meant to mimic the flow of the Aqua Tower building - the material is the metal banding used to secure bricks and stones on large pallets. We salvaged it from the trash behind a home improvement store. 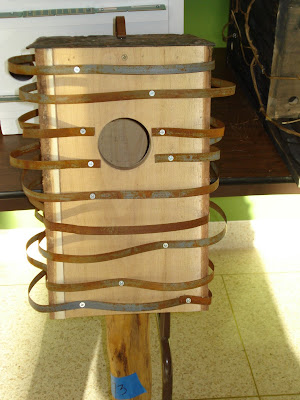 The Purple Martin house named 'Chicago Politics...It's for the Birds' was constructed entirely out of found objects. After the February political primary, I went on a scavaging raid and collected lots of the political signs from our local park. I was actually after the metal wire brackets that push into the ground and hold the signs (good for floating row covers for season extension) but I took the signs as well thinking that we would eventually find a use for them (I have a friend that made a worm bin from them in his garage). Purple Martin houses are the 'condos' of birdhouses - Purple Martins like to live together, so the house is large with lots of holes leading to individual cavities. Our Purple Martin house design had over 10 political signs - each cut to exact specifications with exactoknives in a tabbed manner - so that they slide together in a puzzle-like fashion which enables the house to be constructed without any glue. It also comes apart easily for cleaning and removal of any non-Purple Martins that might set up home. 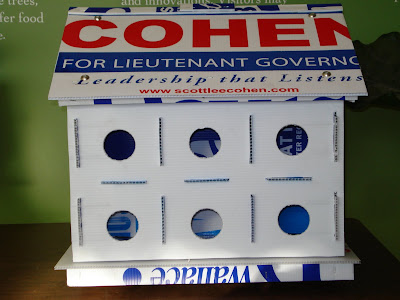 Chicago Politics...It's for the Birds won 3rd prize. We were able to meet Da Mayor of Chicago at the awards ceremony and see lots of incredible designs for birdhouses. Our house, along with all of the houses entered (over 150!) now goes on a road show throughout Chicagoland. It was a fun experience.


Also at the awards ceremony were wildlife rehabilitation specialists with a Barred Owl and an American Kestrel. 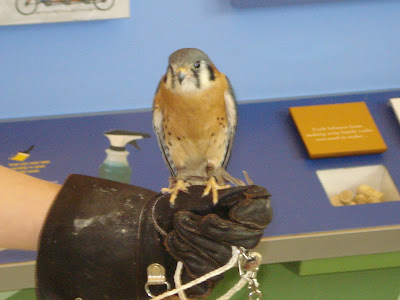 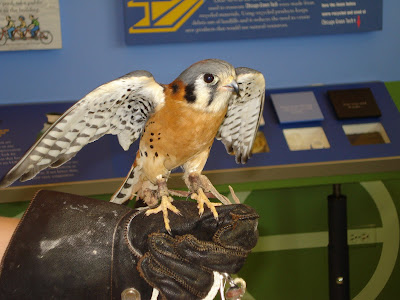 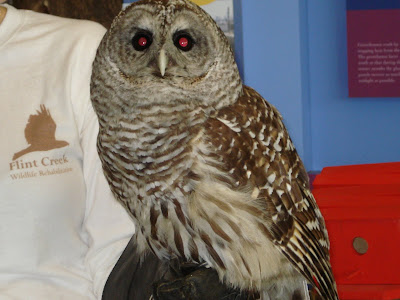 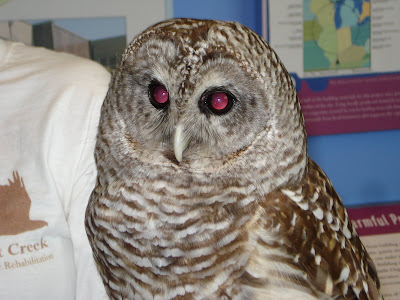 Those are both so creative & beautiful! Congrats!