Sparky got some new friends. 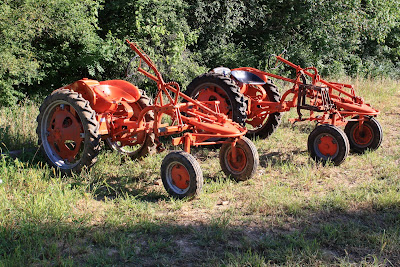 We purchased two Allis Chalmers Model G's. These tractors were manufactured in the late 40's thru the early 50's for small farms. They have a creeper gear and the belly mounted implements allow the farmer to see exactly where the implements are in the soil. They hold their value well and are still very popular with market farmers.

I found two for sale on Craig's List in Cuba City, WI. That is only ~20 miles from the farm so we went over and took a look. We've been driving past this farm for months and watching their hoops, goats, chickens and the G's. So when we saw they were for sale we decided to pursue them. One runs fine and one doesn't run at all. Two cultivators were also included in the package. We eventually hope to convert the non-working one to an electric version. 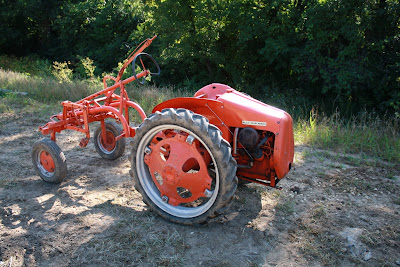 We don't really need two more tractors, but we decided that if we don't like them or if they don't work out well for us we can always sell them.