Working on the barn 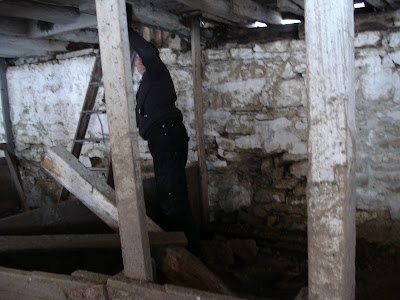 I have been remiss in posting about the work that began in earnest on the barn after Christmas.

We have a bank barn which we estimate to be at least 100+ years old. The lower level is the old dairy barn and the upper is a haymow and storage area for farm machinery. The lower level soil side wall is made of limestone. Time and water seepage have made portion of the wall distingrate (on this photo - see to the right of Bill - that is a big hole in the limestone foundation. If you click on the photo and enlarg.e it, you can see the damage more clearly). Many of the large supporting posts have softened and rotted at the bottom. Our intent at this point is not to straighten the barn (it has a bit of a sway in the middle of the roofline) but to keep it further deteriorating further and save it as it is a grand old structure.

Bill has been thinking, researching and talking to people about this for quite a bit now. We have decided to first shore up the beams that are lacking support in the lower portion. We will then reinforce the limestone foundation by chipping out the bad areas, drilling back into the hill, tying rebar into those holes and pouring new concrete sections - some of which will angle out to push back into the old foundation. (That is all my layman's understanding of what we are doing. I'm not doing it justice.)

In this first photo in the lower portion of the barn, you can see the two black columns, which are jacks (lally columns) which when slightly raised allow the old beam to be knocked out. We'll install the new one in the middle of those two. 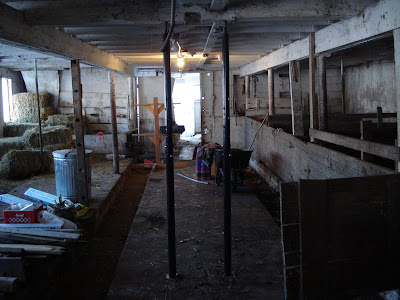 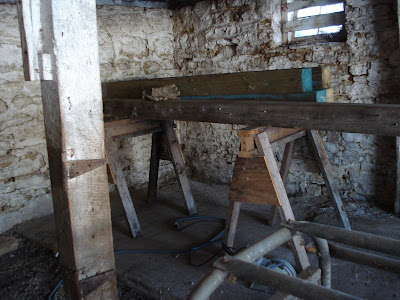 These are the new beams. We salvaged these from a worksite - they were destined for the landfill even though they are like new 4x4's in perfectly good, sound condition! 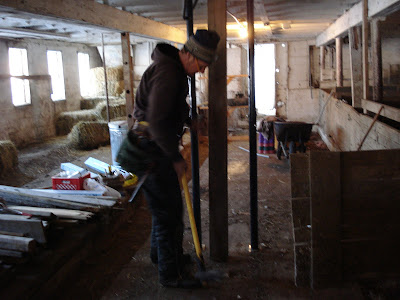 Here you can see Bill knocking the new beam into place between the two lally columns on the side. 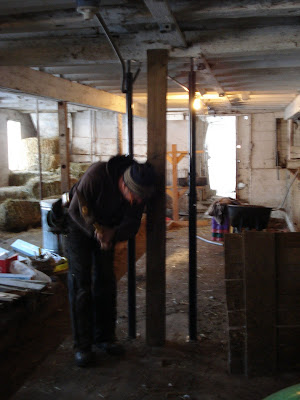 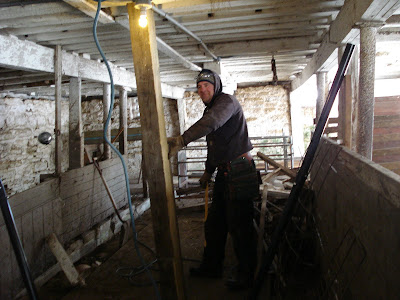 Installing #2. You'll note that on this one we didn't use lally columns. Because there wasn't an old column in this location, we didn't have to raise it slightly to knock an old one out.
We were able to get three new columns installed and I drilled and screwed them into L brackets on both the top of the column to the floor above.
I think the hardest part was getting started! I feel like we have some momentum now.
Posted by angie at 6:24 PM

Nice barn...reminds me of my grandparent's barn when I was young. You are really coming along.