We spent Saturday with Bill's brother and his lovely wife - two of our favorite people. They drove down from Minneapolis to visit. We went to the farm on Sunday morning.
It was great to bounce our farm building plans off of them as they are both creative people with great ideas. While Bill and I were driving home this morning he joked that going forward, he doesn't need to read or research construction anymore - he will just call his brother and say, hey you know anything about ____? His brother is a wealth of information.
We ate pretty local too.
Squash soup made with Squash from Pine Row Farm and peppers grown and frozen by my parents. Lamb Stew from Grass is Greener. Beets from Genesis Growers in Illinois. Blue cheese from Hook's. Greens for the salad weren't local, but they were organic from Driftless Market. I made a pound cake with Organic Valley butter, although the flour and sugar weren't local. Topped with a cranberry compote from local cranberries.

The weather this weekend was unlike anything I have ever seen. Everything was 'flocked' with frost and snow. I've seen fake flocking at the holidays, but I've never really seen the real thing like it was this past weekend. There was no sun, so everyday the flocking on the trees and grasses continued. It was spectacular. 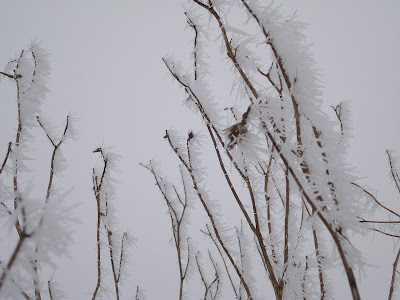 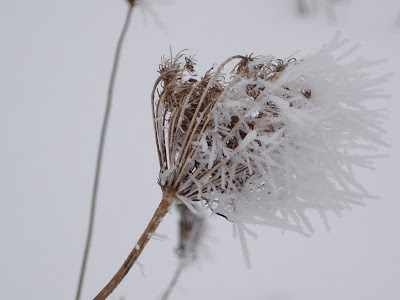 Wow, love the photos of the flake flocking. We had that all weekend here as well and it was so beautiful, but I didn't think to take pix of it. :-( Silly me.

I love the pictures of your building plan. How exciting!

Really sad about the dog but you doubtless made the right choice. Just sad that he had gotten to be that way. Animals don't deserve it. Sigh.

It was really foggy and freezing here all weekend as well. Our flocking didn't last through the days but it was beautiful every morning.
I'm glad you had a weekend to recharge your enthusiasm. I could use one.
Judy

Beautiful pictures of the frost. It's nice to have people to bounce ideas off of. I'm excited for you! :-)

Hi Claire - yes, it was beautiful. Thanks for your comments about the dog. It was hard, but the right thing to do. Better than him suffering in the cold and having the possibility of being hit by a car.

Hi Judy - yes, indeed. I was thinking that this morning - wow, I feel refreshed! It is good to have some 'down time'.

Hi Barb - it was beautiful. Bill and I kept saying to each other - oh, I can't wait to live at the farm permanently and experience the weather changes on a daily basis. You just don't get the full experience when you live in Chicago - I know you know what I mean! :)